The port of Pancevo is one of the first ports in the region to recognize the need to open an intermodal terminal. Dry Ports Terminals has been operating since May 2020, and on that occasion we spoke with Sanja Đurišić, director of the Port of Dunav AD Pančevo and Mišo Luković, director of Dry Port Terminals.

How did you decide to open this year, when the whole world is facing incredible challenges?
intermodal terminal?
“In the previous period, there was no country that did not face the difficulties and consequences brought to us by Covid 19. With all preventive protective measures, life had to continue, so many industries faced the challenge of how to maintain, not just production , but also the supply of raw materials and finished products. Logistics could not, in all segments, adapt to work from home and an important issue for many companies was how to enable continuity of supply in new and unknown circumstances. This was exactly the period in which the real purpose and strength of ports as multimodal hubs were shown. Road transport suffered great difficulties in functioning and one part of the clients immediately took advantage of the position and work of the international port "Dunav" AD Pancevo, as a multimodal terminal. All preventive measures in the company were prescribed in a timely manner, with the support of the Ministry of Transport, whose decisions enabled water, railway and even road traffic to take place in a safe and efficient manner. " - started Sanja Đurišić, director of the Port "Dunav" AD Pancevo.

"Specifically, our clients immediately took advantage of water transport, and imports and exports took place with this type of transport without major difficulties, with special caution of ship crews and employees in the port. Many customers who used road transport in the delivery of raw materials, especially from hotspots, such as Italy, took advantage of the industrial tracks of the Port of "Danube" AD Pancevo and delivered their goods in larger quantities, in order to continue the supply. It has been shown that the possibility of using trimodal transport is crucial for the uninterrupted supply of raw materials, especially in certain production branches, in which the volume of production jumped sharply due to the occurrence of a pandemic. The import of cellulose has drastically increased, so the delivery of raw materials went smoothly thanks to the possibility of reloading goods from wagons and vessels, which takes place at the same time. The export of flour to the countries of the region functioned through the port. The next logical step of the trimodal port concept was the establishment of the intermodal terminal — Dray Port Terminals. Work on the establishment of the intermodal terminal in the Port of "Danube" AD began in 2019 and in April this year, the terminal began active work. Faced with a pandemic this year, the intermodal terminal has become even more important. ” - Đurišić continued.

What will be the initial annual capacity of the terminal?
“The current annual capacity of the terminal is 8,000 TEU on a plateau of 10,000 m2 with the possibility of expansion, in
in line with the increase in workload. Also, next to the terminal there is a public customs warehouse, with a capacity of 40,000 m2 of closed storage space, a customs office, numerous forwarding companies and agents, which enables a wide range of additional services provided by the container terminal.
It is especially important to emphasize that all capacities and types of services efficiently save time and reduce costs for users of container terminal services. The terminal is connected to two railway tracks for road-rail connection and three tracks for road-rail-water. ” - said Miša Luković, director of Dry Port Terminals, at the beginning of the conversation with the representatives of Logistics & Transport.

Do you expect the terminal to have a dominant share of container transhipment in water transport from the beginning, or is a higher share of transhipment between land transport means expected?
"Dry Port Terminals was formed and positioned in the Port" Dunav "AD Pancevo with the aim to, above all, connect the railway, road and water transport of containers. In the first phase of the terminal's operation, the focus is on rail transport, because this type of container transport is well-established, but in the later phases of the terminal's operation, the goal is to significantly increase the share of containers in water transport. At this moment, not all the conditions have been met to restart the container line on the Danube.
We expect that by solving the problem of navigability of the Danube throughout the year, existing users of Dry Port Terminals will opt for water transport of containers. The port's plans have always gone in the direction of establishing a container terminal, but it was crucial to form a terminal that will provide a wide range of trimodal transport services. ” - added the director of the Port "Dunav" AD Pancevo.

Do you expect an increase in container transport in the coming period, and, accordingly, do you plan to expand the initially planned capacity?
“Through continuous cooperation with all major shipping companies such as MAERSK, CMA CGM, MSC, COSCO, HAPPAGLLOYD, as well as all users of terminal services, we expect that the volume of work in the next 2 years will exceed current capacities.

Is the introduction of value-added services for containers and containerized cargo planned?
“We can provide value-added services for containers immediately at the Dry Port Terminal and in the port's customs warehouses. We will use the existing services provided by the port, such as filling and emptying containers, storing goods under customs, weighing containers "- concluded Sanja Đurišić, and Luković added:" Services that are directly related to containers, such as refrigeration connections and thermal containers, container repairs, inspections, shipment of individual shipments to end users are also provided at the terminal. ” - continued the director of Dry Port Terminals.

Will the terminal be part of a line service in water or rail transport?
The main priority of the terminal, in the first phase, is the formation of a train that will run regularly with a precise timetable, and further plans of Dry Port Terminals are to expand the list of clients and terminal capacity, as well as integrating the terminal, first through railways. next steps, and as part of shipping lines.

The absolute imperative and business policy from which Dry Port Terminals does not deviate is independence and neutrality in providing services to all users, both large container operators and individual requirements. ” - concluded Miša Luković at the end of the interview for the magazine "Logistika & Transport". 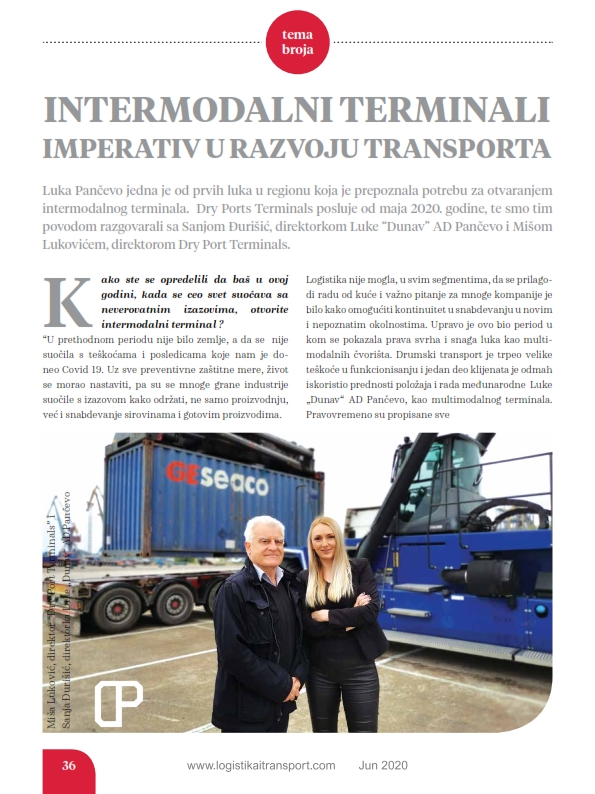 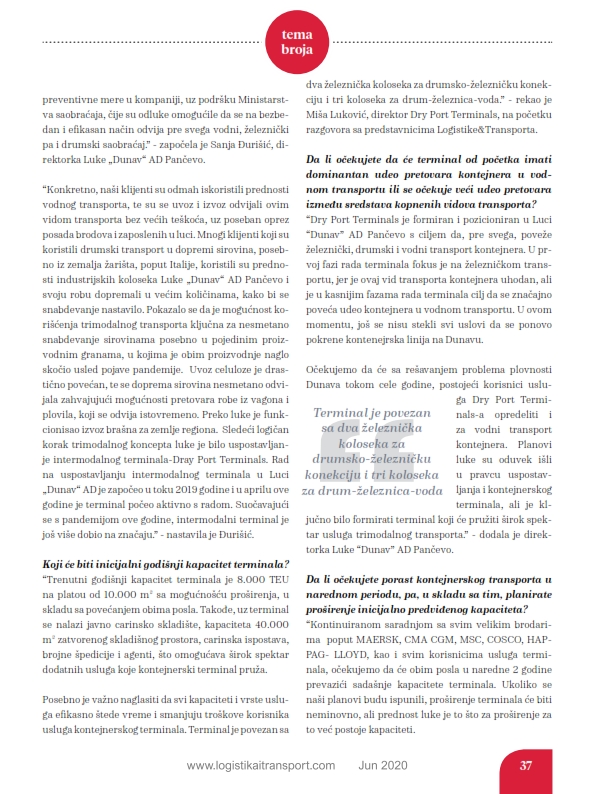 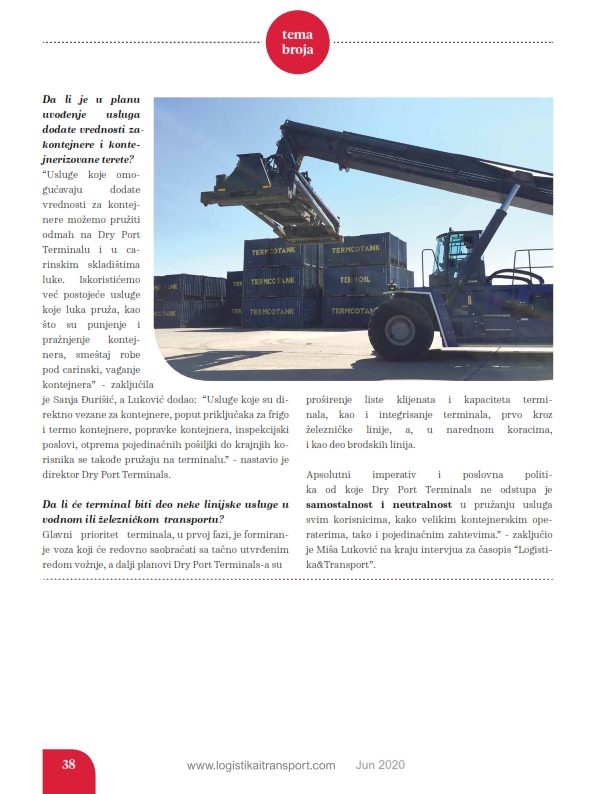