Over 20 vessels found refuge in the canal “Luka Dunav” Pancevo due to the ice on the Danube and the ban on navigation announced on January 8.

The situation is easier than in 2012, when there were 70 vessels in our channel. It would be important if we were officially declared a winter home. There is ice in the port canal, but we are breaking it – says the director of “Luka Dunav”, Sanja Đurišić. 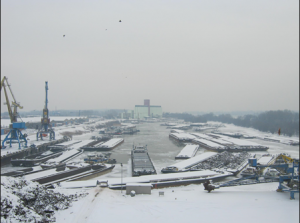 It is still unknown when navigation on the Danube will be allowed again.

We hardly do anything that complicates our business opportunities. In addition to us and companies from logistics and transport, importing and exporting companies will also have great damage. Specifically, until the ban on navigation, we loaded over 7,000 tons of goods at the beginning of January, during the holidays, and from the ban on navigation (January 8) until January 15, we were supposed to load 30,000 tons of goods for exporters, which we cannot do at the moment. Thus, agriculture directly suffers the consequences, where the export of cereals is a big deal. There are still no announcements when navigation on the Danube will be allowed again. – explains Sanja Đurišić.

However, there are no scenes and damage like the ones in Apatin and Zemun in the area of ​​the Danube Port in Pancevo.

It reacted quite well and quickly this time. There were timely reactions even before the decision was made to ban navigation. – said the director of the Port of Danube.

previousHello world!
nextCooperation between the Port of Pancevo “Danube” and the Port of Constanta